The fans flooded into Monticello High School fieldhouse on Jan. 4 as the boys basketball team celebrated both alumni and fan appreciation night prior to the team’s game against Zimmerman.

The Magic fans were also there to possibly witness history, with Monticello senior Matt Todd just 28 points away from tying Nate Holmstadt’s scoring record and 29 points away from surpassing it.

Could he do it? Could Todd become Monticello’s all-time leading scorer?

The question was answered with 4:28 left in the game. With Todd at 28 points and tied with Holmstadt, Todd is fouled and heads to the free-throw line. A career 90+% shooter from the charity stripe, Todd took a deep breath and released his shot. 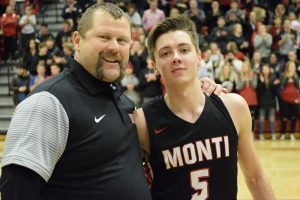 Nate Holmstadt is a legend among Monticello basketball fans. His 1995 senior season ended with him earning Star Tribune’s Mr. Basketball and a banner with his name hangs in the fieldhouse for all to see. Holmstadt finished with 2106 career points, an achievement some believed would never be eclipsed, at least not for a few decades. The team retired Holmstadt’s jersey in January 2015, celebrating the 1994-1995 team while also celebrating the many ways Nate helped the Monticello basketball program. Todd looked on, dreaming of a day where maybe his name would someday hang next to Holmstadt’s. Wondering if he could leave a legacy on the program in ways that Holmstadt did.

Todd has many accomplishments, including being named to the Class AAA All-Tournament Team in 2015-16 despite only being a sophomore. He hit the 1000 point mark early in his career and kept striving for more, quickly approaching the 2000-point mark as his junior year ended and his senior year began. On Dec. 19, Todd surpassed the 2000 points while receiving a standing ovation. He grabbed the game ball and quickly ran up the stands to share the moment with his parents, before coming down and enjoying the moment with teammates and coaches. Matt is also a team captain this season, an ode to his leadership on and off the court.

Prior to Thursday’s game against the Thunder, Todd was third in the state in scoring (277 points), fourth in scoring average (30.8) and first in steals (5.0). He surpassed Grace Sawatzke’s point total of 2014 on Dec. 28 against Stillwater, moving into second all-time in Monticello history with just Holmstadt left to pass. With two home games in a row after the holiday break, it became inevitable that Todd would be most likely break the record on his home court in front of the Magic fans who have cheered him on for years. Magic head coach Jason Schmidt reached out to Holmstadt to see if he could be in attendance for the Jan. 4 game, but unfortunately, Holmstadt had a prior commitment. Instead, he wrote a statement, read by PA Announcer Dave Lindquist after Todd’s 29th point of the night.

“Congratulations Matt on breaking the scoring record! Best of luck to you in whatever your next step is. Again, congratulations!”

The Magic are now 8-2 on the season after defeating the Thunder 82-63.