For almost the entirety of the 2000’s, you couldn’t mention the Big Lake softball program without mentioning Chelsea Erickson. She played on the Hornets varsity team as a seventh grader and in her six years on the team, the Hornets went to state four times. Erickson’s success continued to the college level where she played at Minnesota State University-Mankato, including a trip to the Elite Eight in Chelsea’s junior year.

Now, Erickson is ready to trade in her former colors for red and black as she becomes the head coach of the Magic softball team, beginning in the 2019 season.

Erickson’s love for softball started long before she was a seventh grader on the Hornets team. Growing up as the granddaughter of Wayne Erickson, a longtime Hall of Fame softball and women’s basketball coach in North St. Paul, Wayne would take Chelsea and younger sister Lindsay to practice where they would turn the pitching machine up to 100 and try to hit it. While they didn’t succeed, Wayne was always there for words of encouragement, guiding both Chelsea and Lindsay to the sport they ended up falling in love with. 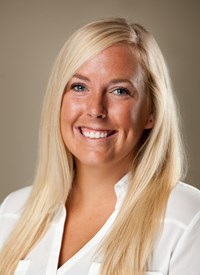 “It was really nice that my grandpa was a coach during the Title IX era,” Erickson said. “I got to see the importance of women’s sports in so many different ways.”

Chelsea and Lindsay stuck together, playing side by side at Big Lake before both playing at MSU-Mankato. With Chelsea being the pitcher and Lindsay the catcher, their bond was as close as ever. That said, the two were still sisters and every once in a while would try to get on each other’s nerves.

After her career ended at MSU-Mankato, Erickson moved to Jacksonville for six months and enjoyed a life of sunshine and freedom away from softball. Chelsea talked about wanting to prove that she could be independent on her own and enjoyed her time as a nanny out for the half year that she was out there. Graduating with a geography degree, Erickson moved back to Minnesota when a job in St. Cloud at Geo-Comm opened up for her. There, Erickson made maps for 911 and the Minnesota connections she made when she lived here the first time around also opened up the opportunity to coach for the first time since graduating from Mankato.

“Growing up, I really wanted to be a teacher,” Erickson said. “When I progressed through school I realized I might want to coach as well. I was struggling with if I wanted to stick with softball or try something different but after six months away I knew that softball was my passion and I definitely wanted to be around the game.”

While at Geo-Comm, Erickson helped out at the College of St. Benedict’s in St. Joseph, MN as a pitching assistant in the 2013 season. While there, she got a call from former coach Lori Meyer who told her there was an opening to help out at Upper Iowa. Erickson applied for the job and was hired, spending two seasons there before being hired on the coaching staff at Missouri Southern. Erickson has spent the last three seasons helping out in Missouri, recently making the move back to Minnesota where she works at BSN.

“I have loved it,” Erickson said about her coaching experiences. “That said, I wanted to be closer to home and I knew that with my experience that I could probably find a coaching job in Minnesota.”

For the first time in her coaching career, Erickson will be working with high school girls as opposed to college athletes. When asked, Erickson beamed with excitement about the chance to work at the high school level.

“You get to be comfortable and get to try new things,” Erickson said about the main difference between high school softball and softball at the college level. “You get to do something different every single day and it isn’t life or death which I really enjoy. High School girls go through a lot and I want to be able to teach the girls those life lessons that go above and beyond the softball diamond. I am going to enjoy helping to guide them in the right light.”

March 11th, 2019 is the first day of practice for softball players in Minnesota and Erickson is ready to go back to the basics to see what the team has. Off the field, many of the girls have gotten the opportunity to meet Chelsea, helping out and running concessions at one of this year’s Monticello football games.

“Overall I am super excited,” Erickson said. “I am ecstatic to begin working with these young female athletes and help them on and off the field as people. Help them grow into these strong, empowered, independent females that know they’re comfortable and confident with themselves a little more than they were before I got here.”

Boys B Squad Basketball B Team at North Branch