While 2020 has proven to be anything but normal, Monticello High School has looked for ways to normalize as much of the high school experience as possible.

One of the ways we can do that is by celebrating our student-athletes who have decided to pursue academics and athletics at the next level. This spring, we have a fantastic group of six students who have represented Monticello well and will make us proud going forward!

I’m so happy that we have six more students taking part in our third “Signing Day,” Monticello Activities Director Gary Revenig said. “They have all meant so much to the programs that they have participated in. I am so fortunate in my role as Activities Director that I’ve been able to support them as they have competed for our high school. They’re all impressive student-athletes who will do well at the next level. I am glad we can still give them the recognition that they deserve. I feel terrible that some of them are missing their main sport along with their peers right now. I hope all of them know how proud we’re of them, and how much we miss seeing them.”

Scroll down to read a little bit more about each of our student-athletes! 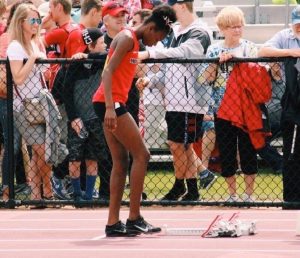 While Ashanti hasn’t been able to run for the Magic this spring, her past success gave schools a reason to want her to run for them in the future. Monticello track coach Kim Nygaard has set up workouts for the girls to do while they aren’t able to practice as a team and Guertin has taken advantage of that, going on runs of her own to stay in shape for the present and the future.

“I love being around my teammates and knowing that we always have each other’s backs no matter what,” Guertin said. “Meeting days are my favorite. Having them cheering on the side makes me happy and makes me want to try so much harder.”

Guertin was part of the 4x400m team that went to state last year, breaking the school record with a time of 3:58.09 alongside teammates Thalia Mendoza-Brunotte, Lily Johnson and Jordyn Larson. 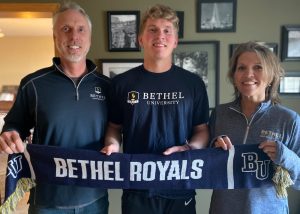 Next fall, Lucas plans on continuing his education and soccer career at nearby Bethel University where he will join the MIAC conference. Johnson has been a staple for the Magic soccer team, helping them to successful seasons that included multiple Mississippi 8 Conference Championships. Johnson plans on majoring in exercise science with a minor in ministry while attending Bethel.

“Bethel has been on my radar for a long time,” Johnson said. “I knew I wanted to attend a Christian college and play soccer in the MIAC. After my overnight at Bethel, I knew it was the perfect fit for me.”

Johnson says that he has lots of good memories from the soccer team but points back to one during his freshman year when the Magic were taking on Cambridge-Isanti. Monticello was up by a few goals and coach Peter Bergquist said that it was time for Johnson to check in for his first varsity minutes. Right away, Johnson got the ball and had a wide-open lane, scoring his first varsity goal. Johnson said long bus rides with teammates, practices, and spaghetti dinners are also among his favorite memories on the Magic soccer team. 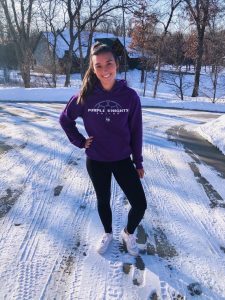 Lauren Jones: Soccer at the University of Bridgeport (Bridgeport, Connecticut)

Next fall, Lauren will be heading out east and playing soccer at the University of Bridgeport in Connecticut!

“Lauren is a phenomenal goalkeeper that is continually pushing herself to improve,” Magic head coach Nathan Budish said. “She has all the tools necessary to be a very successful collegiate goalkeeper. We will miss her greatly and wish her all the best as she continues at the next level.”

A quick search of their campus online shows a gorgeous campus that would attract anyone to at least visit. When Jones arrived, she knew it was where she should be.

“It felt like home,” Jones said. “Not only do they have an amazing soccer program, everyone is so nice and welcoming. I can’t wait to spend the next four years there meeting new people and getting a degree.”

Jones will be majoring in Psychology next fall and looks back positively on all the good memories she has made at Monticello.

“My favorite memory is creating all the special bonds with my teammates,” Jones said. “Especially meeting my best friend Payton Grandia.” 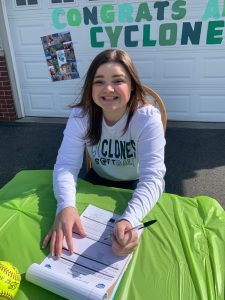 While missing out on her senior season for the Magic, Alayna is excited to announce that she will get to continue playing softball next season for SCTCC!

“I chose SCTCC because I would still be close to home and still be able to play the sport I love,” Manning said.

Manning is a future educator, choosing to major in elementary education while in college. She said that her favorite memory from softball is building strong relationships with teammates over the years.

The Manning family made sure that Alayna has a special signing day last week where teammates drove by to surprise her as she signed her NLI. Kare11 was there to capture the moment as well. You can watch the interview with Manning here! 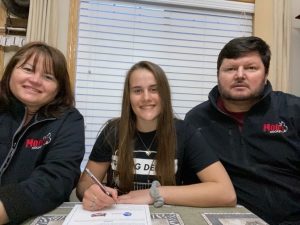 Like Ashanti, Juanel is currently missing her senior track season with the season currently suspended due to COVID-19. That hasn’t stopped Juanel from pursuing her goal of running in college where she will do that at Crown College.

“I decided to attend Crown because I wanted to be surrounded by a Christian community,” Roux said.

Roux has a curious mind which has allowed her to explore many sports and activities at Monticello High School. To name a few, Juanel has played basketball, swam, competed in gymnastics, and ran track for the Magic. She is also heavily involved in her church and sings the National Anthem for many Monticello events.

Roux plans on majoring in business administration and minoring in accounting while at Crown College.

“My favorite memories from track are the friendships I made,” Roux said. “I also loved Friday practices because we would get popsicles when it was done.” 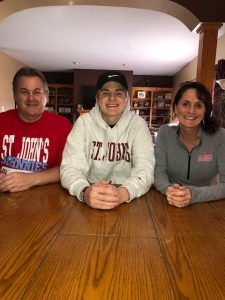 When Austin attends school next year, he won’t have to worry about changing his school colors as he will continue to put the red and black on, this time for the St. John’s Johnnies!

The Johnnies coaching staff made Monticello High School fieldhouse their second home this winter, attending almost every home game to watch Austin as he looked to make his decision on which school would fit him best.

“It was the school that fit me most,” Wetter said about his options. “When I visited, I knew right away that I would love it. It’s located in a great area where you can do a lot of different things.”

Austin’s favorite basketball memory was making the 2019 state basketball tournament where the Magic team was the tenth in school history to advance to state. Wetter was a key component to the Magic’s success over the last couple of years, including becoming the seventh Magic player to reach 1000 points in his career. Wetter is currently undecided on his major.