If you’ve watched a Monticello girls soccer game in the last couple of years, there’s no doubt you know who Miah Olson is. She’s quick, she’s aggressive, and she’s vocal, though that hasn’t always been the case. Three years ago, Olson was on the Varsity team as a sophomore and as an underclassman was often quiet, leaving the leadership to the older girls. As she’s gotten older, her natural leadership has continued to shine through, adding to her impressive soccer skills that intrigued local college coaches.

When it was finally time to make a decision, Olson looked at academics first, looking for schools that had great nursing programs but that she could also play soccer at if she chose to. At the end of the day, Bemidji State University was the choice for Miah. 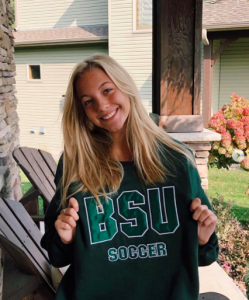 “I went to Bemidji State’s ID camp right before quarantine in March and I liked the school and liked the campus but really didn’t have that “home” feeling that everyone talks about,” Olson admitted about her initial reaction to Bemidji State.

About two months ago, Beavers Head Girls Soccer Coach Jim Stone reached back out to Miah but she didn’t answer right away, instead calling Stone back later where he continued to admire Miah’s skills on the soccer field and say how much he would love to have her on the team. The two set up an official visit in September and the rest is history.

“I went back there and I got the home feeling everyone talks about, Olson said. “I got to talk with the players, watch a practice, and go out to dinner with the coaches. After my visit, I wanted to make sure that socially, academically, and athletically everything was what I wanted. I had a Zoom call with admissions, talked to my parents a little bit more and then decided that Bemidji State was the place for me.”

About a three hour drive from Monticello, Beavers Women’s Soccer is known locally for how successful they have been since Coach Stone has arrived. The team has missed the NSIC Tournament only one time in his tenure and Stone has been named NSIC Coach of the Year four times (2005, 2016, 2017, 2018). Monticello Head Coach Nathan Budish thinks Olson will fit in well with the dynamic of the Beavers.

“The Beavers are getting an elite athlete with Miah,” Budish said. “She is a versatile player that can play wide in the midfield or across the front as a striker. She’s dangerous inside the 6-yard box or from 25-plus yards out.”

While Miah’s excited to head up north next fall, her high school career isn’t complete at Monticello High School and she knows the Magic still has unfinished business. 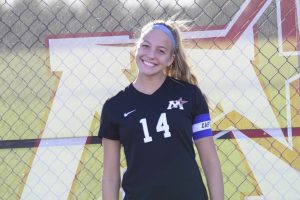 “A big goal for us is to hang that conference banner,” Olson said about one of the team’s goals this season. “We lost to Big Lake and we were kind of down about that but then we bounced back and worked hard and we’re actually right in line for it. Obviously making it to Section finals again this year would be a great thing as well. Those are our top two goals right now.”

As Olson said, the Magic are right in line for a chance at the conference title. Heading into a Sept. 25 matchup vs. North Branch, the Magic are 4-1-1 in the conference with three conference games remaining. Monticello coaches will be looking for Olson and her leadership down the stretch as the team looks to finish the last four games undefeated going into a modified postseason which was announced earlier this week.

“Miah is the longest tenured player on the Varsity team and has established herself as one of the leaders the younger girls look up to,” Budish said. “She loves to have fun with her teammates but becomes a vocal leader when it’s time to get to work. Over my three seasons with her, it’s been a blast to see her transform from the quiet young girl to now taking charge and leading the team well.”

While Olson has worked extremely hard to get where she is today, she hasn’t done it alone. Her grandparents come to as many games as they can and Christie—Miah’s Mom—is there cheering her on and supporting her along the way. The one person Miah really wanted to make sure got the recognition he deserved was her father, Eric.

“The one person I definitely want to thank the most is my dad,” Miah said. “He’s been there since rec. soccer, pushing me, yelling, and making me a better athlete so I think I owe it all to him.”

While the Olson’s would have supported Miah wherever she decided to go, the family is happy she is staying local. Miah is happy too, saying she thought about going out of state but really described how important family is to her and how bad she would feel if she couldn’t be home as much as she wanted to be.

“It is fun to watch your daughter grow and have success with something that she loves,” Christie Olson said. “To find a college that allows her to pursue a nursing degree, continue playing soccer, and be a fit socially is all we can ask for. Spending some fall weekends on beautiful Lake Bemidji will be nice for Mom and Dad.”

While the young and quiet sophomore the Magic saw three years ago is gone, a fierce competitor has risen and Olson is ready to help the Magic the rest of the season and beyond as she continues her collegiate soccer career. There’s no doubt she has a support system behind her that will her wherever life takes her in the next chapter.

“Miah’s drive, determination, and finishing ability will help her transition well into the college game,” Budish said. “It is going to be a lot of fun keeping up with Miah as she continues to grow as a player with BSU!”