Photos from tonight’s match can be found here!

After previous road games to Cambridge-Isanti and North Branch earlier this season, a quick jaunt to Big Lake was nothing for the Monticello Volleyball team as the girls looked to keep their undefeated streak alive against the Hornets on Oct. 29.

The first set began with both teams coming out extremely even. After 12 points, it was tied 6-6, and shortly after, Big Lake took a 10-8 lead. From there, it was all Monticello. The girls settled down and went on a 15-0 run, ultimately winning the first set 25-11. 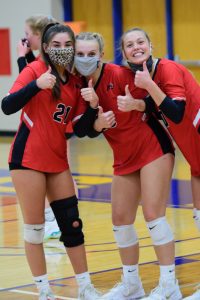 Before set No. 3, the Magic coaches brought the girls together and talked to them about getting back to the basics. The rotation looked slightly different with Junior Hally Holker sitting out with an injury, forcing the Magic to have to adapt. The two teams went back and forth in the set, trading many of the first 25 points. After the two teams were within one point at 18-17, the Magic ended the set with a run, ultimately winning 25-17.

The Magic are now 5-0 on the season and have only dropped three sets in their five matches. The girls are back on the road on Nov. 2 vs. Princeton before welcoming the Chisago Lakes Wildcats to Monticello on Nov. 5. Both games are at 7 p.m.