Resiliency: “The capacity to recover quickly from difficulties.”

Any dictionary written after the 2020 Monticello Volleyball season should include a picture of the girls right next to the word “resiliency.” After a year full of injuries, potential exposures to COVID-19 and multiple other challenges that forced the girls to continue stepping into roles they weren’t accustomed to, the Magic finished the year with a 10-1 record and a Mississippi 8 Conference Championship.

“This team exhibits so many outstanding character traits,” head coach Beth Modaff said in an address to her team on Nov. 19. “I am so proud of what they have accomplished.”

The season started with a cancelled match on Chisago Lakes, a team that in its own right dealt with many challenges throughout the school year. The girls had to wait five more days before beginning the season with a 3-0 vs. Becker. Eight days later they would defeat North Branch 3-0 and the next day defeat Cambridge-Isanti 3-1. The hot streak was on.

Starting player out for season due to back injury? Next girl up.

Starter out to COVID? Next girl up.

Senior out with a shoulder injury? Next girl up.

Third-year setter out for the year with knee injury? Next girl up.

What seemed like a tradition before every match, something would happen to the Monticello Volleyball team that would cause the girls to really have to look deep within themselves and keep fighting. They relied on their deep bench and each other to keep going when the going got tough and to keep hyping each other up. The injured players—Kaylee Stegora, Mya Brion and Hally Holker—became the team’s biggest cheerleaders and the underclassman filled spots as the Magic kept winning.

Everything changed on Nov. 18 when Governor Walz announced another shutdown that would affect the end of the season. The girls were already scheduled to play on Nov. 19, and Nov. 20—the last two days before the seasons were required to end—but the Magic had still not lost a match and wanted to try to compete against the section’s best squads. With the help of the section Athletic Directors, the top four seeds would play in a little unofficial section tournament the last two days of the season, trying to provide closure in a season that had already tried to shut its doors on the Magic multiple times.

While the regular season was supposed to end five days later in a match vs. Cambridge-Isanti, the shortened season made it clear of one thing…the Magic were the best team in the Mississippi 8 Conference. The girls were able to hoist the trophy, even bringing it to teammate Hally Holker who just recently had successful surgery on her injuries suffered in the week prior so that she could celebrate with them. Holker was back on the sideline on Nov. 13 and Nov. 19 for the team’s games, sitting in a wheelchair as she cheered her favorite girls on.

The team’s first loss came on Nov. 19 against Sartell-St. Stephen at Monticello High School, dropping the Magic’s record to 9-1. After the game, the girls celebrated Sam Cotter, Mya Brion, Brooke Bauer and Madelyn Huschka, the team’s four seniors who have given their all for the betterment of the Monticello Volleyball program. Tears from the speeches mixed with tears from the team’s first loss but one day later the ladies brought their smiles and their determination to the court one last time for a Nov. 20 home match vs. Brainerd. Unlike last March when things shut down without any warning at all, everyone in the gym for both teams knew this was the last match of the season and you could feel the energy of a finale fill the MHS Fieldhouse, even with just a few fans allowed to attend. The Magic won 25-17 in the first set before finding themselves down early in set No. 2. The Warriors would end up winning the second set with the Magic bouncing back and capturing set No. 3 and 4 for the season-ending victory.

The Magic’s 10-1 season is one of the best regular-season finishes in school history. While we may never know what would have happened in a non-COVID world and a full playoff schedule, we know it’s a season the girls—and the community around them who got to watch—will never forget.

Thank you ladies and go Magic! 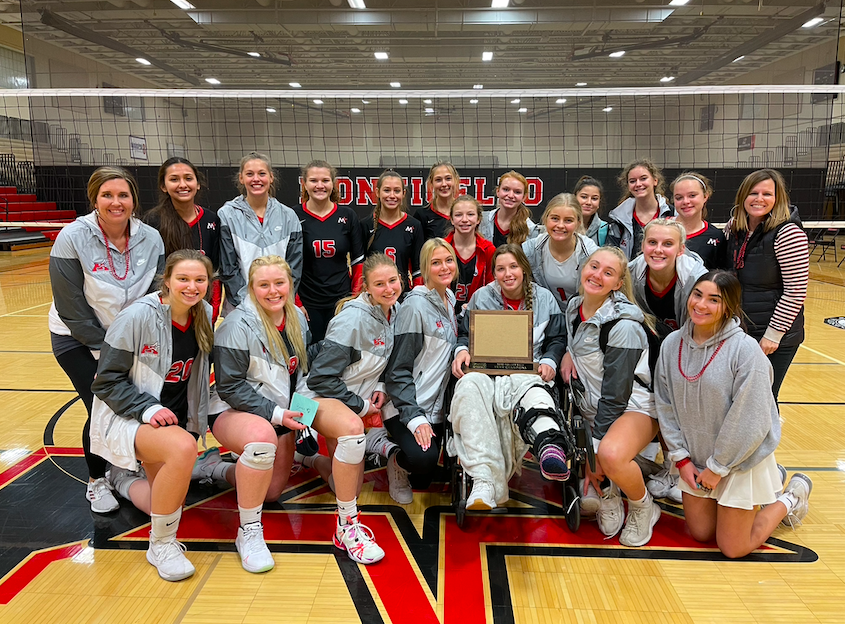 Boys B Squad Basketball B Team at Princeton High School