Every year, Monticello High School chooses two juniors to be recognized as the MSHSL ExCEL Award recipients. These students are chosen as being leaders in the school while also being heavily involved in school activities and having great grade point averages as well.

This year, Halle Dahlheimer and Tyler Rousslang are our ExCEL winners!

Halle was coming home from Minnetonka when she found out that she was chosen as the recipient for this year’s ExCEL Award. Usually, the first person she would tell would be her parents but since they already knew, she needed to tell someone.

“I told my Grandma,” Halle said. “She was very proud.”

Dahlheimer is extremely involved throughout the entire school year at MHS. In the fall, Halle runs Cross Country and had a fantastic season. She would have run at this year’s MSHSL State Tournament had one been held. She also trains at Riverdog Crossfit during the fall months as well. 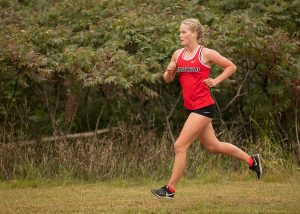 In the winter, Halle’s attention turns to hockey where she plays for the North Wright County RiverHawks. So far, the NWC RiverHawks are 3-2 and Halle has recorded one assist. In the Spring, Halle plays lacrosse as a midfielder. With no season last year for the Magic girls lacrosse team, Dahlheimer is ready to get back on the turf in a couple of months.

“I am hoping we are able to have a season because I miss the game and the girls,” Dahlheimer said.

Halle is excited for the upcoming hybrid schedule returning and getting back to seeing some of her friends on a regular basis.

“I really miss the social aspect of being surrounded with people outside of your household,” Dahlheimer said. “I miss walking to each class and having conversations with people you wouldn’t otherwise see.”

Dahlheimer didn’t make it here alone and thanks her family for getting her to where she is today. She says that they are extremely supportive.

“My dad always told me that hard work beats talents and that if I continue to work hard that it will get noticed,” Dahlheimer said. “He has pushed me to be the best version of myself and continue to push me each day. My mom has also helped me to become the person I am by encouraging me and always cheering me on. I couldn’t thank either of them enough for everything they’ve done for me.”

Congratulations on all your success Halle!

In a typical year, Monticello Activities Director Gary Revenig would have called the award winners into his office to congratulate them personally. When the award was announced, sports were all shut down and students weren’t allowed in the building, leaving Revenig to email the winners and then call home.

“I found out I was a nominee while looking through my school email,” Rousslang said. “When I came back from work one night, my mom was on the phone with Mr. Revenig who told her that I won the award.”

Tennis is Rousslang’s primary sport which he plays in the Spring and has for many years. Rousslang also coaches tennis in the summer and during parts of the year, teaching his skills to other young players around the community. Rousslang is also involved in Unified and Math Team at MHS as well.

Much like Halle, Rousslang really enjoyed the time when we were in school and is excited to get back.

“My favorite part of Junior year has been going to school in person for at least a little while,” Rousslang said. “I am a very social person and I feel like I work better in school.”

Rousslang has high expectations for the Magic Tennis team this Spring. He hopes that they can have a great season and they can make it to state both as a team and/or individually. Tyler’s family all loves to play Tennis and he says they also helped to get him to where he is today.

“I can’t really pick one person who has helped me because my parents have helped me an equal amount,” Rousslang said. “They have always been there for me and supported me through it all.”

Boys B Squad Basketball B Team at Saint Michael-Albertville