Defined by the MSHSL, the Triple ‘A’ Award—academics, arts, and athletics—honors high school seniors throughout the state who have a 3.0 or higher-grade point average and who also participate in league sponsored athletic and fine arts activities.

This year’s recipients for Monticello High School are no strangers to anyone in the building. Between the two of them, they are on multiple athletic teams, participate in fine arts from Wind Ensemble to One-Act Play, and are fantastic students in the classroom as well.

Rachel was completing her AP Biology homework when her mom came down the stairs, trying not to smile. She was confused, not knowing who could have possibly called her mom but knew because of the smile on her face that it must have been a good call.

Just minutes before, Monticello Activities Director Gary Revenig had called the Dahlke household and told them that Rachel had won the Triple ‘A’ Award.

“It feels really good that all my hard work was being recognized by administrators at school,” Dahlke said. “It is very humbling to receive this award and I am very honored.”

It’s hard to go somewhere at Monticello High School and not find Rachel close by. She’s a two-year captain on the MHS Starettes Dance Team and is also on the golf team in the Spring. She’s in the MHS Wind Ensemble, National Honor Society, Project 4 Teens, and Magic Mentors. Rachel is also a student representative for the Monticello School Board and also volunteers in the summer at Kid’s Kitchen.

Like most students, Rachel’s least favorite part of the school year thus far is not being able to see her classmates every day.

“These are the people I have grown up with and the teachers and staff who have had such a positive impact on my life,” Dahlke said. “It is really hard that we have to spend our last year of high school behind a computer screen.”

That said, Rachel’s outlook remains positive as students begin coming back on Feb. 3 and she is able to see some of her classmates on a regular basis again. She’s also working on planning for what is to come after she leaves Monticello High School. 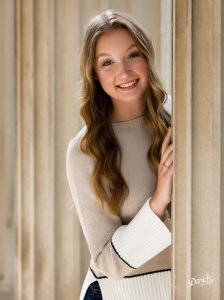 “With so much uncertainty in our world right now, it is refreshing to look forward to my news few years in college and what is to come,” Dahlke said.

Besides coming back to school, Rachel is looking forward to continuing to dance, play golf this spring, and hopefully have Prom her senior year. Since the 2020 Prom was cancelled, the class of 2021 is hopeful that something can be put together for some sense of normalcy towards the end of their senior year.

The woman who came down the stairs to tell Rachel that she was the Triple ‘A’ Award recipient is also the person Rachel wants to thank most for getting her to this point in her life.

“I would one hundred percent like to thank my mom,” Dahlke said. “She is my biggest cheerleader, my greatest motivator and although she gets hard on me at times, I know she wants what’s best for me. She’s the reason I am who I am.”

And that is just the beginning.

Richards found out he was a Triple ‘A’ recipient from his dad who had been called by Mr. Revenig earlier in the day.

“We sat around the dinner table and it was exciting to hear the news,” Richards said.

Above and beyond what was mentioned above, Richards is also involved in Musical, Choir Leadership Team, DECA, Project 4 Teens, and acts as manager on the girls’ golf team as well. While Richards is disappointed about not being at school, there have been some benefits of online learning as well. 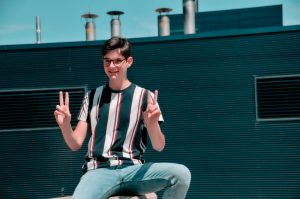 “I have had a lot of time to work on college apps,” Richards said. “My schedule has been pretty open, so it gives me an opportunity to work on what comes next.”

“I am hopeful we will still get to put on Newsies this Spring,” Richards said.

With all the time alongside Mr. Herfindahl in Richard’s many extracurriculars, it’s no surprise that Joey chose him as the person he wants to thank when given the chance to do so. The two have spent countless hours together through choir, one act play, and the musical over the last few years.

“Mr. Herfindahl has been the most incredible inspiration for me throughout high school,” Richards said. “I wouldn’t have the work ethic or love of the arts that I do without him.”

Boys B Squad Basketball B Team at Saint Michael-Albertville