In a normal year, the day for Quinn McCalla, Nelson Anderson, and Alex Fearing would have started at the Xcel Energy Center as all three would be in the opening rounds of the state tournament in St. Paul.

Instead, the morning started at Mound Westonka High School where all three Monticello juniors looked to advance to the top-8 in their respected weight class. The Section 5AA top wrestlers were all up against each other along with the top wrestlers from 6AA.

While all three wrestled well, Anderson prevailed further than Fearing and McCalla, advancing to the top-8 in the 132-pound weight class in Class AA.

Anderson’s day started with a match against Rameses Peterson, a sophomore from Totino Grace. Peterson was no match for Anderson as Nelson won by major decision with a final score of 14-2.

In the next round, Anderson went up against Jackson Bunde of Annandale/Maple Lake. The senior came in with a record around .500 and was much better competition for Anderson. That said, Anderson still came out on top, winning 3-0 and advancing to the finals against Luke Schumacher of Big Lake. The two are both from Section 5AA but Schumacher came out on top this time, pinning Anderson 1:33 into the match and pushing Nelson into a true-second match. A true-second match is wrestled when the third-place finisher and the second-place 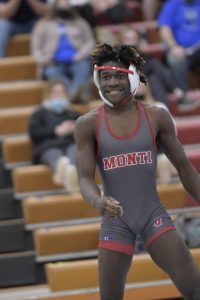 finisher haven’t wrestled yet in that tournament. Anderson was up against Jacob Nguyen who came into the match with a 28-2 record on the season. Anderson was able to control the match early and often, getting to an early lead and maintaining it through all six minutes. Anderson won 11-0, his 25th victory of the season pushing him to next weekend’s top-8 at St. Michael Albertville High School.

McCalla and Fearing both went 1-2 on the day, making it to the fifth-place bracket. Due to the new rules and trying to limit matches, the fifth-place matches weren’t wrestled. McCalla finished with a 25-4 record on the year while Fearing finished 19-10. Both will be keys to success for the 2021-22 Monticello Wrestling team.

Anderson’s rounds will start at 2 p.m. on March 26th at STMA High School.