Bob Mueller attended Mahnomen High School, graduating from there in 1959. He had a high school record of 38-6. Bob
attended Moorhead State College and earned a B.S. in Math Education. A shoulder injury prevented him from
competing. Upon graduation, Bob began teaching and coaching at Underwood High School from 1963-1966. He then
taught and coached at Monticello High School from 1966-1977. His coaching record was 142-40-4. Bob served as a
Region 5 representative to the MSHSL, was named District 19 Coach of the Year twice, and his teams were crowned
Wright County Conference Champions 6 times. Bob has volunteered at the State Tournament for over 20 years. He
founded and continues to help with the Monticello wrestling Tournament. He started the junior high program in Monticello.
He served as an official in college and high school for 40 years. 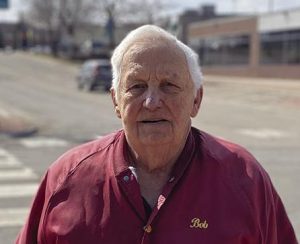 Friends Jacob Holker and Brad Fleahman wrote “Bob created a powerhouse wrestling team through the 70’s winning numerous Conference and District titles. It is important to point out at that time Monticello was a small community competing with the large metropolitan schools where there was only one class of wrestling. Anyone who knows Bob knows that he lives, breathes and bleeds the sport of wrestling. His coaching and contributions to the sport have touched countless lives-wrestling in Minnesota is better because of his involvement.”

Justin Amidan, former Monticello wrestler wrote “Throughout my years in the Monticello wrestling program I’ve seen Bob Mueller give of his time and energy to the sport long after he was done coaching, and I feel he has earned this induction.”